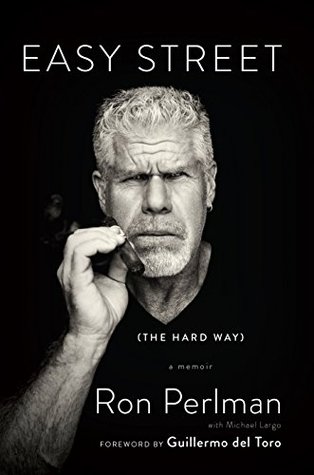 Thanks to a welcome recommendation, I have now discovered my new favourite book!

Or at the very least my new favourite autobiography/memoir. In the moment though, having just recently finished the final chapter, confining it to a sub-category seems unnecessary, I loved it that much.

And there is little question in my mind about why I loved the Perl’s Easy Street: The Hard Way as much as I did. If nothing else it managed to check off most of my favorite boxes. It paints a vivid picture of growing up on the streets of New York’s urban neighborhoods, offers us an intimate look at the inner workings of Holllywood, invites us to consider what it means to truly wrestle with faith and doubt in an industry that is as harsh as it is rewarding, and develops into a truly remarkable and genuine celebration of film as one of the great and most celebrated art forms of our day.

How could this not grab me. Truth be told I found it really hard to put down.

With all that said, the fact that the book also manages to be so much more than this is what really caught me off guard, and this is a testament to Ron Perlman’s knack for storytelling. There are moments in this book that genuinely brought me to tears, others that had me laughing out loud in the middle of a Starbucks, and many more that found me riveted to the page in anticipation. And then there were the parts that functioned as a sort of call and response, a biting social commentary that sheds light on the divide that exists between the haves and the have nots while reaching outside of the Hollywood enigma and pushing into the reality of the every day.

(SPOILER ALERT)
I have to imagine that if you pick up this book you have some level of pre-determined interest in or connection to Perlman’s list of films or television series. And if you are like me you will likely find yourself heavily anticipating the chapters that touch on those specific movies or shows. But this is where it might be fair to be forewarned but not, in my opinion, deterred. I might suggest that the way you read this book might depend on the particular show or film that you are especially passionate about, which means your experience of the narrative could be very different than the next. I think this is something that lends towards the books accessibility and charm.
If you can view it in this way, it is also fair to say that some of the films get more attention than others, primarily because of the ways in which certain films or shows overlap with important periods in his life. However, that doesn’t necessarily mean those shows or films get shortchanged.

As an example, I was especially interested in Perlman’s relationship to Del Toro given that he is one of my favorite directors (and hopefully the subject of a planned research project in 2018), and so I found myself waiting in eager anticipation only to find that he doesn’t show up until well near the end and is given very little page time. However, even as the brief moments we do get with Hellboy are stellar and absolutely eye opening, it is the insight we are given into Perlman’s life along the way that told me more about his relationship to Del Toro than an actual synopsis of his filmography ever could on its own. The same goes for Sons of Anarchy, which is given the fewest words in the book. Knowing who Perlman is and where he is at in his life during his time on this show shed more light on the nature of his on-screen character than talking about the show ever could.

With that said, the structure of the book essentially follows three threads:

This structure allows the book to meander in a sort of free flowing way, moving backwards and forwards between periods of reflection and recreations of his past. The structure also managed to mask the trajectory of what is, in actuality, a very clear and very intentional narrative. I’ll be honest, I was getting so lost in the different moments of his life and getting so much joy from reading his perspective of his experiences with the different film productions, actors, producers directors (there is something that gets me giddy about picturing him running around as a young kid in a shared playground with Al Pacino) that I failed to catch on to the trajectory of the narrative until I was over halfway through the book. And this is in large part because he is as genuinely funny as he is serious. The chapters on Marlo Brando (spoiler, he really LOVES The Godfather) and the making of The Island… were particularly memorable, especially in the way he deals with Brando himself. This was one of those big laugh out loud moments for me. And the very short descriptive of Alien: Resurrection helped me to make some sense out of why that film remains one of my favorites of the franchise in spite of its overall lack of reception.

But by the time I realized what he was actually doing with what becomes a very candid work of self reflection and confession of a man formed and framed by the ragged edges of the streets, his lingering sense of self doubt, devastating loss and struggle with a mental disorder, I was absolutely taken. He uses his life on the Hollywood stage to mirror his life off of it, showing how the beast he was typecast with became a means through which he needed to understand himself. And by the time he brings all of this together in the end in what ultimately becomes a compassionate and compelling call towards reform in Hollywood at large, the narrative is truly ready to knock you out of your seat and into action with him.

Perlman is a generation behind me, and it is from this place that he was able to provide me with an up close and personal look not only at his time in Hollywood, but of the Hollywood I grew up with. I can’t count the amount of times that I found myself feeling a bit nostalgic for the world he describes, even if I didn’t recognize it as nostalgia in the moment. The respect and awe with which he talks about his favorite films and meeting his favorite stars and being a part of the industry is absolutely infectious, and it bridges the line between the cynicism of those who see Hollywood as a picture of corruption, money and power, and that sense of wonder that permeates those of us who truly have an affection for the magic of film as an art form.

But make no mistake, Perlman is not blind to Hollywood struggles. In one of the most powerful parts of the narrative, he sheds light on just how pervasive mental illness is in Hollywood, and offers us glimpses of why this is. He humanizes Hollywood even while as he remains in absolute awe of it, and he lays himself bare in the process as well. Perlman is a flawed individual in the process of finding redemption and grace. For as much as he recognizes the trappings of success in Hollywood, he is as prone to these vices as anyone else. He is in so many ways a very broken man.

And yet he also stands as a picture of hope. His respect for art and filmmaking is a reminder of why Hollywood (and what it symbolizes) is so important. Even as he admits that most would likely look at him on the outside and think he is a jerk, the testimony of his determination to always look out for the little guys, the people working those menial jobs in the background that are so important for helping a film be successful, for the marginalized and the have nots, is what reveals who Perlman is on the inside. He is a man who taught me personally through this book what it means to prepare myself for the second half of life. And his depiction of a midlife crisis is one of the most powerful definitions I have encountered. He taught me about what it means to see God when it seems like He is invisible. He taught me about what it means to come to terms with my own struggle with anxiety and depression. And he renewed my appreciation of film as an art form. Man did he renew that.

Which brings me to the most important chapters of the book, in my opinion. This is where the trajectory of the narrative gains full force. This is where he turns it all towards a biting commentary of where Hollywood is headed. And not in a ‘back in the good ol’ days’ kind of way, but in a we need to be reminded of the best that Hollywood stands for. We need to be reminded to slow down and appreciate what art is, what good art does, and what it means to be a dedicated artist. And we need to be reminded of the ways in which art can speak into our social context today. There is a sense of loss that we feel flowing through these pages, a loss of Hollywood of old, the magic that captured so many of us. But there is also a sense of hope, hope that sees opportunity for this magic to be recaptured and redistributed. A hope that he channels into his own aspirations for finishing well in his second half of life in the most practical of ways. Reentering the field, helping others by reinvesting in the younger generation, and, most excitedly, doing something he has long felt he needed to do… Hell Boy 3.