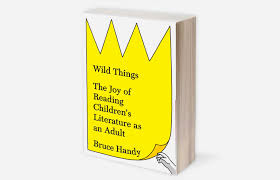 Have you ever stopped to consider how we measure what qualifies as Children’s literature, or what makes Children’s Literature “children’s” literature?

It might sound like an obvious question, but the more I think about it the more I wonder why I have never asked this question before. It is a question I feel author Bruce Handy presupposes through the premise of his book Wild Things The Joy of Reading Children’s Literature as an Adult, a book I recently finished as part of my 2018 Reading Challenge. It falls under my goal of reading 5 recent books from either 2017 or 2018. This was released last year and so it hasn’t been sitting on my TBR list for very long. But it is one I had been anticipating. And it didn’t disapoint.

For Handy, Children’s literature really isn’t all that different from adult literature. They tend to tackle similar themes, they have layers and character development. If there is a difference for Handy it would seem it relates to the perspective of the reader themselves, or perhaps more important, their disposition, which as handy puts it, for a child is looking upwards at a world that looks a whole lot bigger before it becomes small. To revisit these childhood stories as adults, as the subtitle suggests this book intends for us to do, is then to make our world bigger again.

From Birth to Death
The structure of the book narrows in on select books and organizes them in a way that reflects a journey from birth (our awareness of dependency in Goodnight Moon by Margaret Brown) to maturity (our awareness of death in Charlottes Web). In organizing it this way, which is essentially chronological, Handy is able to narrow in on the different nuances of each age category in a way that makes for a fascinating study of how literature shapes us and the ways in which our life experience, our our age, shapes the way we engage with story in different ways according to the different phases of our life.

For example, stories written for a very young age tend to begin in what Handy describes as that “sacred space” where the world is not yet messed up, and more specifically, parents have not yet messed up. It reflects a period of innocence as opposed to naivety, the sort of hopeful disposition that is able to see and embrace the world in simple terms.
The older we get the more complicated the world becomes of course, and this is where children’s literature begins to adapt to reflect the anxieties of growing up in this world, encouraging imagination (Dr. Seuss), and then expanding our capacity for imagining into the introspective (fairy tales), and then ultimately our ability to reflect outwards in meaningful ways (Chronicles of Narnia). All of this builds independence and equips us to step out into (and make sense of) the messiness of the world.

Handy also underlines the cyclical nature of Children’s literature. There is a point in which these books begin to cross the line between what is for children and what is perceived as adult literature, and the ways in which this happens reveals a lot about the world that we inhabit and how ambiguous this line can sometimes be. It is not static. Every childhood experience is different. But what is shared is the truth that, as we grow older we, all of us, gain perspective. And the further we get from our childhood, we, all of us, also lose perspective as well. We no longer are able to see the world from looking up in the way we once did. So Handy is suggesting there is worth in returning to these stories that shaped us in order to help us remember what it was to see the world from the perspective of looking up rather than down. And the strange and wonderful truth that comes out of revisiting these stories is that we are given the opportunity to reengage with themes that meant something to us growing up but that we are able to understand more fully as adults. This concept is both humbling and informing. These books teach us to use our imagination before the world is able to steal it away, and revisiting these stories is a way of reimagining once again, just from a slightly different, grown up perspective.

The Lives That Shaped the Stories
There were so many great reflections in this book that helped me along the way to see the idea of Children’s literature in a whole new light, and much of this revolved around the lives of the writers themselves. Each of them were fascinating and unique individuals who often found themselves writing their own experiences into their books in different and sometimes unexpected ways. I found it shocking to read that so many (most actually, with very little exception) children’s authors were childless and didn’t seem to care for children. A. A Milne was a great example of this, something that the recent bio-film (Goodbye Christopher Robin) captures with great clarity as well. As was Margaret Brown who penned stories for those who are really young, and, ironically she was the only author Handy deals with who actually studied “formally” to write Children’s literature. Or there was Lewis, who writes as one who was never truly able to let go of his own childhood experiences even as he held great respect for the capacity of a child like imagination.

In truth, as the author posits, they all respected children in their own way. That’s what made each of them such great and captivating authors, and perhaps it is worth considering the fact most of them did not study formally might mean the true colour of children’s literature is far less standardized and far more nuanced than we might assume it is when we first consider the question of what Children’s Literature actually is. There is a fluidity to these stories that tends to reach beyond static boundaries and which is eclectic and surprising, even more so when we come back around to reading them from an adult perspective.
Fairy Tales
One of the more interesting sections of the book for me was the chapter on fairy tales. There is something about this middle ground, that space when our ability to imagine is being tested and pushed and challenged, that is so exciting for me, and Handy has so many great things here to say about what fairy tales are and why they are so effective. As Handy suggests, “we can never know fairy tales. They remain wild things at heart”, seeing the power of Fairy Tales as a “fusion of mystery and immediacy”. It gives us a place to question while being extremely attentive to our need to still see the world through hopeful eyes.

Handy goes on to say that “fairy tale worlds mimic the real world as kids experience it- the strangeness, the newness, the unfamiliarity, the fear of hidden monsters, the arbitrariness of adults demands, the supernatural assumptions about almost everything (paraphrased).” They are, as he goes on to say,  “the last echos of “ancient myths”. They bring us face to face with the horror of the world, and admittedly as Handy points out, most fairy tales if adapted from their source material would earn a hard R rating.

But the thing is, they also tap into our need for wonder and light and good. Handy has some interesting things to say as well about the way Disney helped tap into this need for wonder and light and good in a much more definitive and forming way than the Grimms did.
Another really interesting part of this section is seeing the contrast between fairy tales and animal characters. Handy outlines the specific nature of animal characters, suggesting that animals are easy for children to engage and sympathize with in terms of understanding good and evil, but they also emerge because of the apparent lonliness of the writers themselves. The animals tend to take on “the political and social colourations of their own era” and helped the writers to examine these traits in ways they could make sense of in light of their own troubled lives. Animals, in this sense, according to Handy, incite their feeling of smallness in a big world, and there is something considerable about the way animals can take us deeper into the messiness of growing up in a way that, if it were a grown person telling the same story it would likely look something more along the lines of The Sopranos or Game of Thrones.
“Fairy tales look inwards while animal stories look outwards.” We don’t identify ourselves with animal characters, but we do identify the animal characters with the world in which we live, and thus animals can in some sense capture the brutality of this world as well as its potential for good in a similar way Game of Thrones does for adults.

A Love Letter to Children’s Literature
Beginning with what is possibly the first children’s book in 1690 with the New England Primer, Handy has written a love letter to children’s literature. He helps us see it as a sacred space, offering us the chance to navigate the forming years of our life in a way that allows us to reconcile the simplicity of the world we once accepted with such ease with the messiness of the world we come to discover and wrestle with and ultimately embrace.

There is poignancy to the suggestion, as we arrive in the end at Charlottes Web, that “as adults we weep for Charlotte (death), as kids we rejoice that Wilbur had all these new friends (life).” Handy admits he is not a religious or spiritual person, and if there is a slight downside to this book it is that this creates a visible tension between the wonder we find in the stories he deals with and his more pragmatic and binding world view (something I sensed before ultimately coming to know his position in the chapter on Lewis). But this statement for me, even with its obvious humanist undertones, was profound for me in a religious and spiritual way. Handy sees this as a reflection of the “cycle” of life. I saw this more as a call to learn to see the world again through a fresh sight of eyes, eyes that are able to challenge our sense of control and certainty.

The joy of reading children’s literature is ultimately, for me, about holding on to wonder and imagination and, above all, hope. It reminds me as an adult that cynicism does not need to overshadow joy, and that the truth about our world that these stories have to share and mirror for us is truth that we need to hear as adults as much as children, possibly even more so. And as Handy ultimately comes around to say in his closing words, the joy of reading children’s literature as an adult can really come down to this simple idea- it’s so that we “keep reading”.