If there was a flaw in the film White Boy Rick, one could argue it is the film’s central, titular character played by Richie Merritt. If you know the story of his casting, he was a troubled youth hand picked straight from the principles office to portray a troubled youth on-screen. On paper the idea sounds inspired. On screen it becomes obvious that Merritt is outmatched by a tremendous supporting cast, most notably the incredibly talented Matthew McConaghey. At its best, the film allows the supporting cast to elevate Merritt’s emotionally static performance. At its worst Merritt keeps the film ever so slightly chained to his level of inexperience.

I can see how this could represent a problem for some viewers. It makes for a slightly uneven viewing experience. But the context in which I saw this film allowed me to play this semblance of imbalance as a sense of of inspiration and an overall strength. I knew nothing about the story of White Boy Rick going in. If anything I had high hopes from the trailer that this was going to be a notable Oscar film. In-fact, the only thing I really knew was the casting story of the young Richie Merritt, and through that small bit of information I was able to read his story into the character he plays in the film. Which of course sounds a bit counter intuitive to what good film making “should” be. Merritt should be bringing us into his story, not expecting us to read into it something that is not earned. But I felt a degree of humility and earnestness behind the inexperience, an earnestness that has followed his public journey as well on his way from the principles office to the big screen. Commenting on the struggle, at one point he declared, “I’d remember what my mother always told me: ‘God wouldn’t put you here to fail,’ ” he says. “I would take a couple of deep breaths when I was anxious. I would always try to be in the moment, have fun and do what God brought me to do.”

This degree of humility suits a character who is uneducated and an equally unlikely candidate. It left room to consider his performance was perhaps more honest than unpolished, a reflection of his own context rather than aspiring or trying to be anything else other than his true self. And the more the film went on, especially in the films final 30 minutes, the more this began to grow on me.

Regarding the film as a whole, since seeing it for the first time I have read a number of articles and reviews that have found not just Merritt, but the entire film to be slightly underwhelming. I have heard many decry the films lack of a clear trajectory. Even more have complained about the films pacing, some calling it flat out boring and uninspired. In nearly every case (if not all), these two issues seemed to come back around to the idea of the film as “social commentary”, which is to say, some feel like the film needed to comment on “a” or any number of social issues that arise through the context of the film- the plight of Detroit, poverty, gun control, drugs, prison reform; but that it never truly commits to any one of these points, rather feeling scatterbrained in terms of what it wants or desires to say, even to the point of saying nothing at all.

It is fair to say this is where I diverge even more sharply in my own opinion and experience of this film. The first thing that deserves mention is the degree to which this film is not the film we see in the trailer. The trailer advertised a fast paced, taught, entertaining character drama about a particular kids story of living through the epidemic of a post apocalyptic Detroit. The moment I realized most of the trailer occurs in the first half hour of the film was the same moment I knew my expectations were going to be upended, if simply because the story itself had yet to be told. What the film becomes, rather quickly I might add, is a slow burn, immersive experience that sheds light on the everyday moments that form the real life, post-apocalyptic setting. Instead of simply telling the story in a direct and concise way, it is content to meander, at times allowing us to simply sit with the visuals while it takes the necessary time to build a deeply felt sense of atmosphere which flows out of this routine sense of direction and misdirection.

I think peoples criticism of the pacing and lack of clear direction speaks more to people’s expectations than to an actual weakness of the film. It is fair to want a film to represent a more direct social commentary, but I think in doing so it becomes easy to miss what White Boy Rick actually is and desires to be, which is a dysfunctional family drama. This also happens to be the film that landed with me on a personal level, more so than if it had been a more direct social commentary.

I think where the film truly finds its voice is at the halfway point when the narrative takes a sudden twist out of its more dire sensibilities and into a complicated vision of optimistic fervor. We see McConaughey’s character sitting on the porch of their house having a conversation with Ricky about the idea of family. In a life born out of their own given and earned social context, the idea of family seemed to remain just slightly beyond their grasp. In this moment though it is an idea that seems realized, an idea that maybe, just maybe could capture and reinforce a bit of Ricky’s sentimental longing for those forgotten childhood moments where “things were good for while, right?” And yet the sentiment of McConaughey’s character that breaks through this moment of perhaps ill-placed optimism quickly reminds Ricky that “family”, or at least our expectation of family, is an incredibly fragile and volatile thing. It is a stark picture of what it feels like to be stuck in a cycle without hope while doing everything in your power to simply put another foot forward. 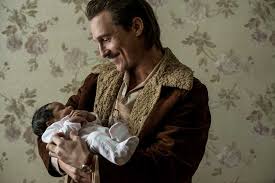 It is out of this moment, looking both backwards and forwards as the story moves seemingly from point A to point A (for lack of a better description of the movies trajectory), that we begin to see where this slow burn is heading. The people we meet at the end of the film are not the same ones we meet in the opening moments. There is transformation, even if in some cases it is hard to recognize, and this transformation arrives in the midst of the fragile and misguided world that they embody.

Sometimes when your expectations are upended, a film can go very wrong. And sometimes, as it did for me, it makes the film that much more compelling. I was there for the real life story, and instead I got something that was far more immersive, a film content to sit and marinate in its sense of time and place. The narrative that it does follow becomes important for how we learn to weigh our sympathy for a family of corrupt individuals making corrupt choices that somehow and in someway manages to mirror something of worth and demand our empathy. And it is this process that becomes incredibly important for the ways we are able to engage with larger social issues. If we can’t gain sympathy for the brokenness of others, and if we are unsure how to see the good in something that appears on the outside to be morally corrupt, our engagement with social issues will be limited to the level of responsibility we see people taking for their own problems. And yet these problems are rarely so black and white. Often they are systemic and complex. What White Boy Rick teaches us is that what is most important when it comes to those larger social issues and concerns is taking the time to hear the story that lies behind it.

For Richie Merritt, it was the compassion of others that gave him the chance to better himself and to tell his story. In the context of this film it is the story of a family that ultimately leads towards a compassionate end. In both cases the starting point is the same- a story about corrupt people making corrupt choices struggling to become better people. And that is the issue that compassion should be concerned about first and foremost.