Since we are isolated and stuck inside during this Christmas season, I decided this year I was going to put together a list of of my favorite Christmas stories. The angle I took in putting this together is Christmas “pairings”, be it in book form or film. These are stories that seem to me to have a connection in spirit and focus, and which have inspired me over the years.

I have come up with 15 pairings of films/books in total, and my plan is to present those films one a day along with a brief reflection on why these stories resonated for me, how I see them fitting together, and what I think they can say to us in a more difficult Christmas season.
Here is my eleventh pairing 🙂 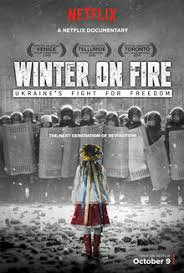 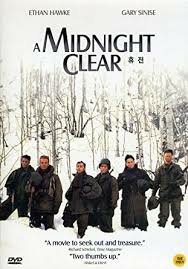 We realized history was being made,”

With plans to fly to Kiev and stay for only 2 weeks, Afineevsky’s efforts to capure the current crisis in Ukraine soon found him caught in the middle of the Euromaiden Revolution. He describes it as a small group that quickly exploded into a full blown resistance, with him and a second camera person capturing every second of it. The result is one of the most intimate depictions of a revolution “in process” ever captured on film.

At least part of what makes this film hit home for me is that had we not been handed the sudden sale of our house 5/6 years ago, we would have found ourselves stuck in this same revolutionary war. Being in the middle of our adoption process at the time, the next step was to fly to Kiev where we would spend the next 2-3 months finding a child and completing the process of becoming a family. Currently living in rural Manitoba, we had decided we wanted to move back into the city before we left. The problem was we couldn’t sell. We had been sitting on our home for a good year or more before, leading into December, our projected leave date for Ukraine, we were suddenly presented with a chance to move. We decided to stall the process while we made the move, eventually leaving the following the August. In the meantime, we watched from this side of the ocean as the events captured in Winter on Fire got worse and worse. Coincidentally, we had the privilege of arriving in Kiev on Ukrainanian Independence Day following the revolution, which featured an incredible display of unity unlike anything I have ever witnesssed before.

In 12:08 East of Bucharest, a name which is a nod to the time of day Romanian Dictator Nicolae Ceausecu fled in the 1989 Romanian Revolution and the place he fled from (Vaslui), we approach the idea of a revolution from a slightly different vantage point. This dark, satirical comedy sheds a light on post communist Romania by posing a simple question- did a revolution actually happen, with the inference of this leading to a second question, how do we know? The answer seems to be, by the people participatig in the revolution. The film’s biting commentary digs into the nature of this kind of revolutionary “language” as we follow these men who decide to hold a live television broadcast with guests and inviting people to call in as a way of celebrating the ousting of this Dictator. When the original guests bow out (to which they bring in two new ones), those who call in to the live broadcast begin to question the truthfulness of their claims, suggesting that none of them were actually there on the ground when he fled. Thus can it really be called a revolution?

A Midnight Clear, a quietly affecting and introspective World War 2 film, suggests that when it comes to this relationship between the world we are fighting against and the world we hope to inherit, it is often the witness of the people on the ground that carries the most weight when it comes to understanding why revolutions happen.

All three of these films take place at Christmas time, which I think adds a powerful undercurrent to this disscussion of revoluionary language. An element of the Christmas story that often gets neglected is its own revolutionary language. Jesus came into a world divided by empire and power, and thus the Gospels are intimately concerned with saying something about empire and power. In his wonderful book “The Day the Revolution Began”, N.T. Wright says:

“Whether we believe in Jesus, whether we approve of his teaching, let alone whether we like the look of the movement that still claims to follow him, we are bound to see his crucifixion as one of the pivotal moments in human history.”

What Wright does is try to peel back the layers of more problematic readings that have tended to equate Jesus with the wrong kind of power and bring us back to the heart of the Gospel as revolutionary language (opposing the kind of power that marginalizes and oppresses). The problem Wright says is primarily an interepretive one, something that has led to the Gospel’s diminished ability to say something about the world we hope for in a Christian sense, while also aligning Christianity far too often with the wrong kind of power.

What Christmas is able to remind us of is the way in which God revealed himself as one who is bringing about the true revolution, the new creation, which begins with the birth of Jesus and climaxes in the death and the resurrection. As we celebrate the Christmas story we celebrate the proclamation that “a new sort of power will be let loose upon the world, and it will be the power of self-giving love. This is the heart of the revolution that was launched on Good Friday.” (Wright, The Day the Revolution Began)

And yet, crucial to this revolution is that fact that in Jesus, in the incarnation, we are called to the be image bearers of this new Kingdom vision. In the ancient world, the idols of the god (or gods) were the last thing to be placed in the temple, and in the Judeo-Chrsitian story we are the idols meant to bear witness to the image of God through our participation in this self-giving love. We are called to bear witness to a different kind of story. And in a poignant reflection on this very reality, Wright suggests that one of the most powerful tools that we have in telling this story is the creative process.

“If we are talking about the victory over evil and the launch of new creation, it won’t make much sense unless we are working for those very things in the lives of the poorest of the poor. (And) If we are talking about Jesus winning the victory over the dark powers and thereby starting the long-awaited revolution, it will be much easier for people to believe it if we are working to show what we mean in art and music, in song and story. The great philosopher Ludwig Wittgenstein said, “It is love that believes the resurrection,” and hearts can be wooed by glorious or poignant music, art, dance, or drama into believing for a moment that a different world might after all be possible, a world in which resurrection, forgiveness, healing, and hope abound. Gifts that stir the imagination can frequently unblock channels of understanding that had remained stubbornly clogged when addressed by reasoned words.”

The stories we choose to tell can help shape the trajectory of our present societies. This is how film itself is a revolutionary language in the light of history. It is also how sharing in the Christmas story can help reshape our own understanding of a divided world, bringing hope to the hopeless and life to the lifeless.

In Winter on Fire, Afineevsky chooses to enter into the trenches and tell the story of a people caught in the cross fire of political and empire laden powers on either side, a people left struggling to see the promise of new creation in their midst. The final scene which takes place over the holidays offers an incredible picture of a people allowing themselves the freedom to imagine a new world, with unified song and glowing candles constrasting with the death and the guns.

In 12:08, we see a people celebrating the new creation of a post communist dictatorship while being confronted with the question of how it is that they arrived where they are.

And as A Midnight Clear imagines a people caught in the middle of these two perspectives, I see the Christmas setting of these three narratives offering the means through which to see and understand all three stories through a larger perpective, a larger narrative vision. The celebration of Jesus is a celebration of a new revolution, the beginning of this movement towards the new creation. It provides us with a vision of hope for the future while also arriving in the midst of this present darkness. Christmas becomes a light breaking into our midst and calling us to a greater participation in the way of this self-giving love. A call to persist in the face of contrary and destructive forms of power in the hope that a new kind of power might emerge in its midst, a power that promimses to make all things new.